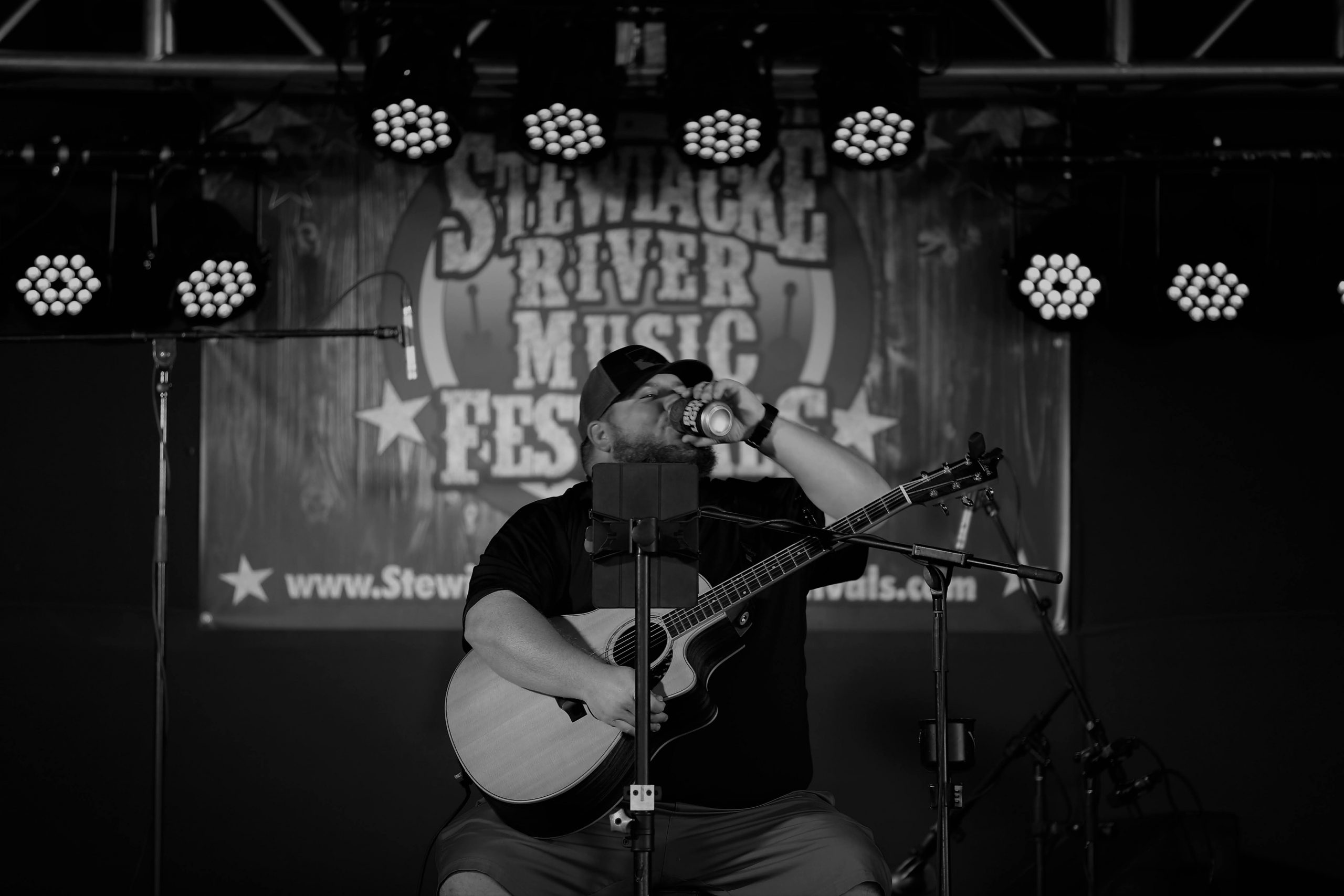 Jon Cyr is a husband, Hockey Dad of 3 and community driven musician from Lower Sackville, NS. He plays local pubs throughout HRM, private parties, wedding and corporate events all over Nova Scotia. He is very thankful for many of the opportunities Music has given him including a chance to sing on stage with Johnny Reid at the Scotiabank Centre, a trip to Nashville back in 2007 where he proposed to his now wife at the stairs of the Ryman Auditorium in front of a sold out crowd waiting to hear George Jones play.

Cyr has been known to use music as a way to bring people together and also as a way to help some heal. After losing a brother and nephew both to Mental Health struggles he has connected with The Mental Health Foundation of Nova Scotia on several fundraisers including one with Theo Fleury (former Calgary Flame) and also earned the “People’s Choice Award” at the A Different Stage of Mind fundraiser where he and local Realtor, Maggie MacGillivary, played out Lady Gaga & Bradley Cooper with a performance of “Shallow” raising over 66K for the event.

During our last Covid lockdown Cyr spearheaded a project, with the help of a close friend, to raise over 25K for Feed Nova Scotia, Red Cross (Stronger Together Fund) and Music for Medical Workers all from behind a camera in his basement. He collaborated with several local artists and performed online shows accepting donations and running online auctions to raise funds all the while entertaining folks trapped at home who needed an outlet during the shutdown.

When not playing music Jon can be found watching his kids play hockey, broadcasting hockey games at the local arena or when the weather is warm oftentimes he can be found in or around the woods at local Golf Courses searching for his tee shots.

Jon has been an amazing addition to our Saltscapes Events both here in Halifax and in Masstown NS.  We’re thrilled to welcome him to our stages and are guaranteed a fantastic performance from start to finish.
Lisa Sampson

Jon was able to provide entertainment for our community event, and so many people told us how much they loved having him there. It really set the mood and helped everyone have such a great time. His demeanor was bubbly and upbeat, and the quality of his singing was that of a true professional. Thank you Jon for joining us for Herring Cove Days – we’ll be having you back for sure!
Jill Hann

Jon has been the centerpiece of many Premiere Mortgage corporate events. From the Tall Ship Silva to White Point Beach Resort or to Hatfield Farms, Jon has come to entertain everywhere we go. He has truly made our corporate events extra special. A true original Maritime talent. I’d follow Jon anywhere to see him entertain and look forward to having him join us at the next Premiere event.
Don MacVicar

Jon Cyr and his band helped make our special day even more special. They were professional, relaxed, easy to work with, and most importantly, rocked the house, giving our guests an amazing time that went well into the night. You won’t be disappointed booking Jon Cyr for your next event.
Kyle & Christina Racki

We hired Jon for a Client Appreciation Event at Obladee Wine Bar. He was AMAZING! Jon arrived early with a smile. He was set up and ready to go before we even arrived to decorate. Countless times throughout the evening people approached me just to ask where I found him and how they could hire him. Everyone, especially us, were amazed with his talent and dedication to showcasing his craft. Thank you Jon for everything you do! If you are looking for a live musician look no further. You will not find anyone better!
Don Ranni

We hired Jon for our wedding in October 2019. He was recommended after we expressed that we felt a DJ would not suit who we are. We had two different locations 20 minutes apart, with just intentions of him playing at our reception because the ceremony was to be held outside and in a field with no power. After he asked for some information about our day, he went out of his way to offer to set up wireless speakers and have a microphone ready for our ceremony, and to also be set up with the band in our barn. Any requests were no trouble at all for him.

When the day finally came, it was an absolute downpour and he still took the time to set up at our outdoor ceremony despite the risk the rain would not stop – and it certainly didn’t.

At the reception, he had the band set up and microphone available for our speeches. Everything went flawlessly thanks to Jon & his band – the entrance songs and first dance were timed perfectly. The acoustics and sound level were perfect and MANY people (including my husband) made comments about how at first they didn’t realize he was singing – everyone’s first impression was that he sounded so amazing it had to be a recorded song playing in the background.

I was so touched after the wedding to find out that Jon drove my brother who is in a wheelchair, up the huge hill to the field so that no one had to push him.

Jon and his band exceeded far beyond any expectations that I had and we are so pleased that he was a huge part of our day. Friendly, professional, and not to mention amazing musicians.

Jon creates a really welcoming vibe at our company parties. It’s as if he becomes the host and we can truly relax and enjoy the time spent with co-workers and friends. He plays something for everyone, our guests of all ages and interests love his style.
Jess Mitchell

We hired Jon for our Annual Christmas Open House and he was a big hit with all our guests. His music set the tone for the event and helped everyone relax and enjoy themselves. I would highly recommend Jon for any Corporate event you may be hosting! We look forward to working with him again.
Jill Orman

I hired Jon to sing a few songs as part of a Nova Scotia kitchen party for just over 300 guests attending the 50th Anniversary of the International Snowmobile Congress 2018 held at Peir 21 in Halifax. He was so impressive, is amazingly talented & an incredible singer/performer that we didn’t want him to stop. Numerous people took time to reach out throughout the conference providing many positive comments. Jon definitely earned his standing ovation. Thank you for the memorable performance & contributing to the success of ISC2018.
Marsha Eddy

We hired Jon for amazing clients of ours and he was the perfect fit! Jon was extremely accommodating through the whole process and very easy to work with. Come the day of the event, Jon was just as amazing! Jon is an extremely talents singer/ performer who had everybody on the dance floor! We look forward to working with Jon again.
Kathryn MacPhee